The Luxor Temple is a large Ancient Egyptian temple complex located on the east bank of the Nile in the city of Luxor (ancient Thebes).
Known in the Egyptian language as ipet resyt, or “the southern harem”, the temple was dedicated to Amun; during the New Kingdom was the center of the annual festival of Opet, in which a statue of Amun was moved along the Nile near the Great Temple of Amun at Karnak Temple, also known as Ipet-sut for the fertility rite.

The construction of the temple began during the reign of Amenhotep III in the fourteenth century BC Horemheb and Tutankhamun added columns and statues, but the greatest expansion occurred with Ramses II about 100 years after the start of work. Luxor is the only major temple complexes Egyptians to have the marks of only two kings on the architectural structures.
Restoration was undertaken by Alexander the Great and the emperor Tiberius. During the period of Arab rule, the complex was abandoned, until in the thirteenth century there was built the Mosque of Abu el Haggag, overlooking the courtyard of the columns and the entire complex settled an Arab village. 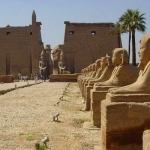 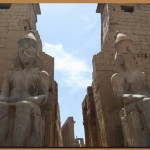 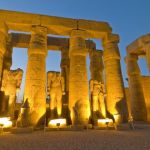 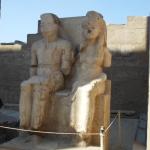 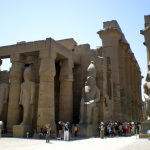