The temple complex of Karnak – of which the Great Temple of Amun and the Temple of Luxor are only a part – is located on the right bank (with respect to the source) of the Nile and its construction goes hand in hand with the ancient Egyptian history; it is, in fact, an overlap of subsequent structures so that it is now almost impossible to locate the original nucleus (see Fig. b.), dating back to King Sesostris I of the Twelfth Dynasty, which was made up of three small local oriented East-West, today non-existent, and of which there are only thresholds located in the rear of the sanctuary of the “sacred bark” by Philip Arrideo, and near the “Kiosk of Sesostris I” rebuilt with components found which fill the Pilione III (Seti I , Dynasty XIX).
From the twelfth to the XXX Dynasty, over a period of over 1600 years, every king or Pharaoh has left its mark by making changes, sometimes taking advantage of the existing buildings as quarries or material “usurpandole” in its name.

Under the Convention Egyptian divine perfection consisted of a triad, or trinity; even in the case of the temple complex of Karnak, we see the same image with the result that the triad is made up of the aforementioned Amon, his wife Mut and by his son Khonsu who, while not enjoying a whole right, is celebrated as the Feast of Opet, in both precincts of parents with a temple dedicated to him in each. The fence temple of the goddess Mut (approximately 250 x 400 m) is linked to that of her husband Amon by a “dromos”, an avenue of sphinxes criocefale (ie with lion body and the head of a ram), while in each of the enclosures more There is a lake for lavacri holy priests. 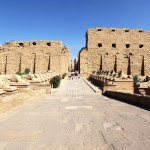 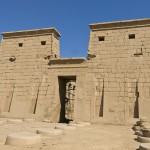 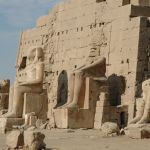 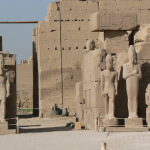 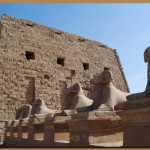 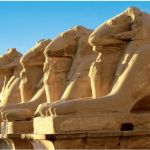