Medinet Habu is the name usually given to the mortuary temple of Ramses III, an important structure of the New Kingdom stands on the site of Medinet Habu in western Luxor, Egypt. Besides its importance for the size Intrinsically, the artistic and the architectural, the temple is probably best known to contain inscriptions depicting the arrival and the defeat of the Peoples of the Sea during the reign of Ramses III. Some stone blocks appear to have been removed and reused in the temple of Isis at Deir el-Shelwit.

The temple, about 150 meters long, is a project of the Orthodox, and is very similar to the nearby mortuary temple of Ramses II (the Ramesseum). The outline of the temple measures approximately 210×300 meters, and contains over 7,000 m2 of walls decorated cn reliefs. Its walls are relatively well preserved, and the complex is surrounded by a ring of mud brick that may have been fortified. The original entrance passes through a guardhouse fortified, known as migdol (architectural feature classic fortzze Asian time).
Immediately inside the walls, to the south, there are the chapels of Amenirdis I, Shepenupet II and Nitocris I, all under the title of God’s Wife of Amun.
The first pylon leads to an open courtyard, surrounded by colossal statues of Ramses III as Osiris on one side, and on the other not carved columns. The second pylon leads to a peristyle, with other statues of Ramses. From here you climb a ramp, through a columned porch, leads to the third pylon and from this to the great hypostyle (who lost the roof). Reliefs and heads of foreign prisoners are in the temple, perhaps symbolizing the control of the king of Syria and Nubia.
In the Coptic era there was a church in the building of the temple, then removed. Some recordings of the main wall of the temple have been changed from Coptic sculptures.
The royal palace was connected directly to the first court of the temple through the “Window of the apparitions”. 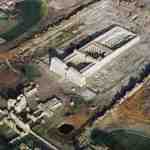 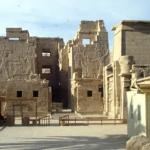 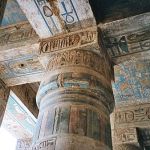 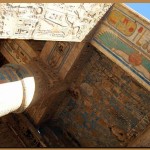 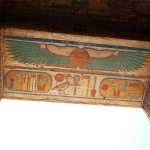 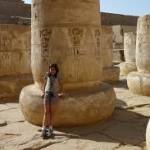