The Galleria Vittorio Emanuele II is a covered walkway (or mall), which connects Piazza della Scala and Piazza Duomo with each other and with two streets (Via Silvio Pellico and Via Ugo Foscolo) with two short arms perpendicular to the main axis. It was designed by architect Giuseppe Mengoni and was built in 1865 in an eclectic style, with grotesques, caryatids, pilasters and lunettes, typical of the second half of Milan. The statues that decorate it are the Milanese sculptor Pietro Magni.
In the gallery hosts many designer shops and famous brands, as well as popular cafés, restaurants and luxury hotels SevenStars Gallery. It is considered, along with Via Montenapoleone and Via della Spiga, one of the venues of the Milanese luxury shopping.
Dedicated to the King that opened in 1867, was made to merge the Piazza Duomo and La Scala Opera House. It now has shops and cafes. 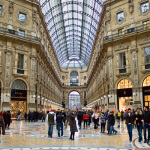 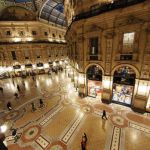 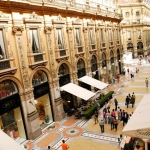 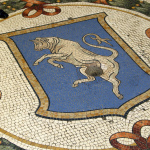