Waterfall Gorge Baatara is one of the most beautiful in the world.
This incredible wonder of the three bridges across the abyss, already beautiful in itself. Located Tannourine in Lebanon, it is a masterpiece of nature that goes back millions of years ago.

After the winter, when the snow begins to melt on Mount Lebanon, its waters rushing down among the rocks, creating a waterfall that each year slowly erodes the limestone. Today, this limestone has more than 160 million years, which is when the dinosaurs were still around. The age of these limestone walls, along with the erosion of water, gave shape and character to this charming place.

Here are some amazing pictures of the Three Gorge bridge and its waterfall, with a height of 250 meters. 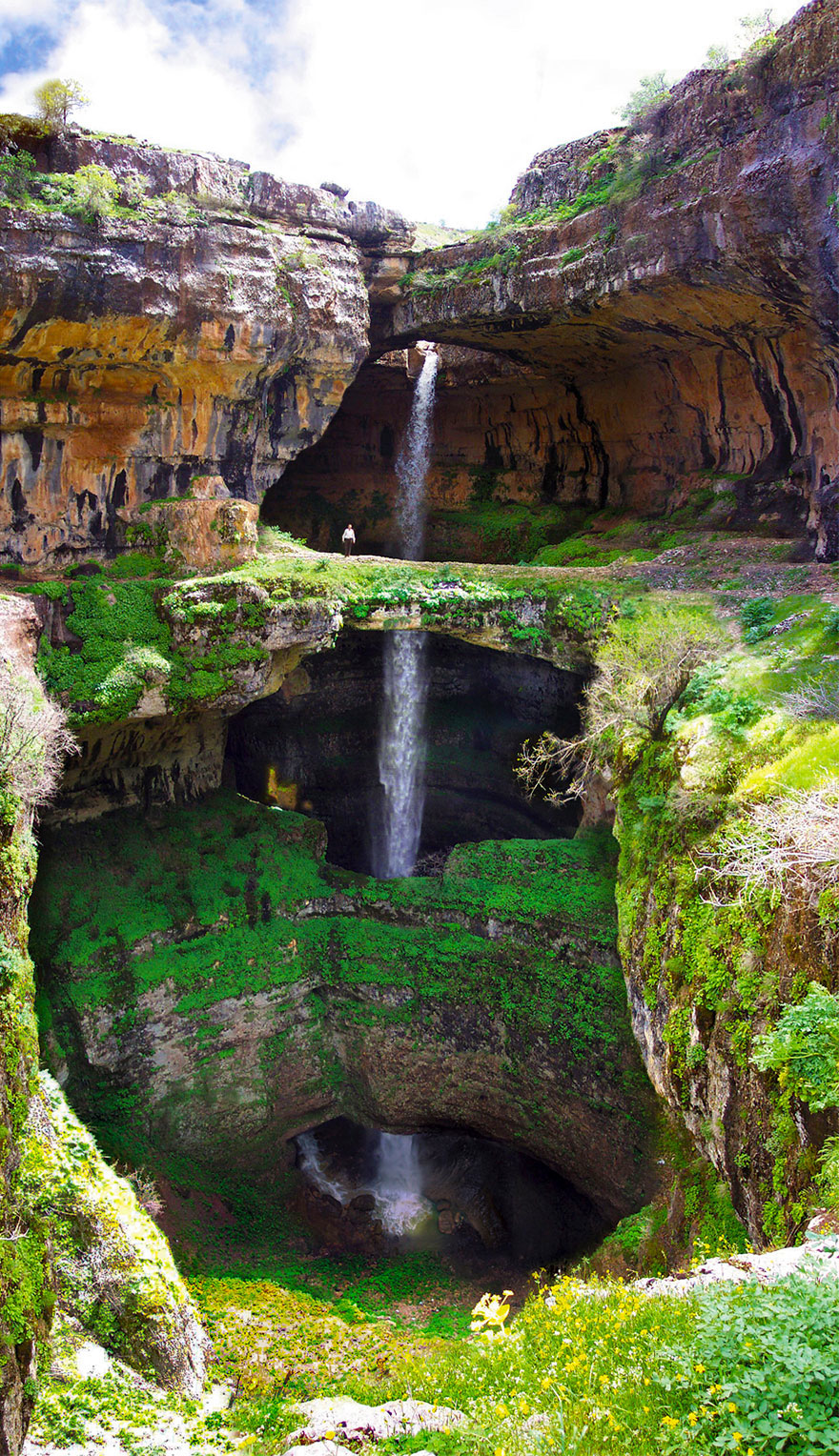 The amazing waterfall and the three natural bridges are located at a village called Lebanon Balaa.

The best time to visit the gorge during the melting of ice on Mount Lebanon, when the water begins to flow toward the rocks. Usually this period is between March and April. 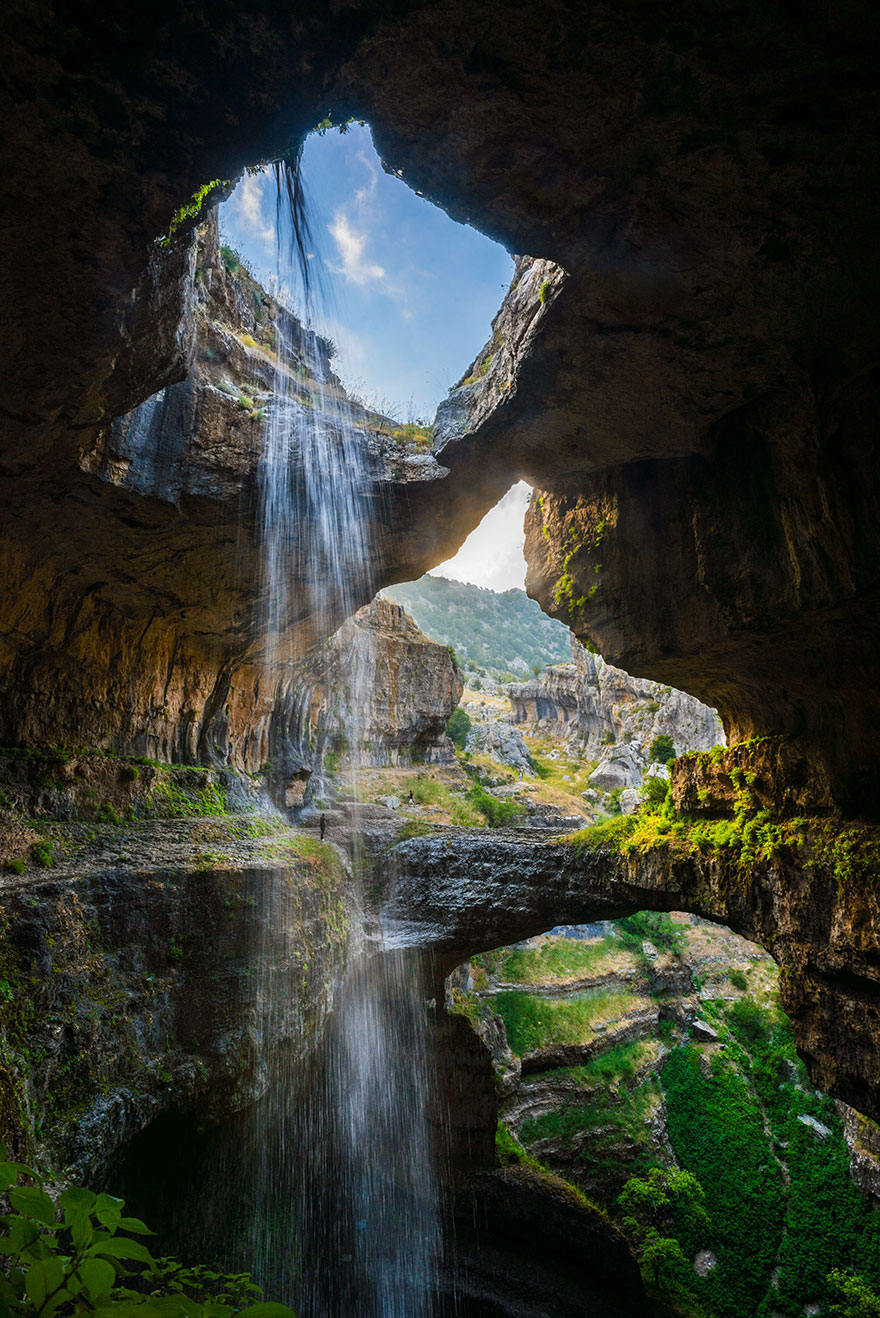 Geologists say that the bridge on the top seems to be the oldest rock formation, while the two lower decks were formed probably in a more recent period, following the collapse and the collapse of the limestone rocks. As you can see, the rocks are still affected by the action impetuous of water falling directly on the limestone, hitting areas that with the passage of time will be subject to erosion.

Although people are aware of this place for quite some time, the bridge and the waterfall has become a tourist attraction in 1952, after a biologist named Henri Coiffait discovered the area. 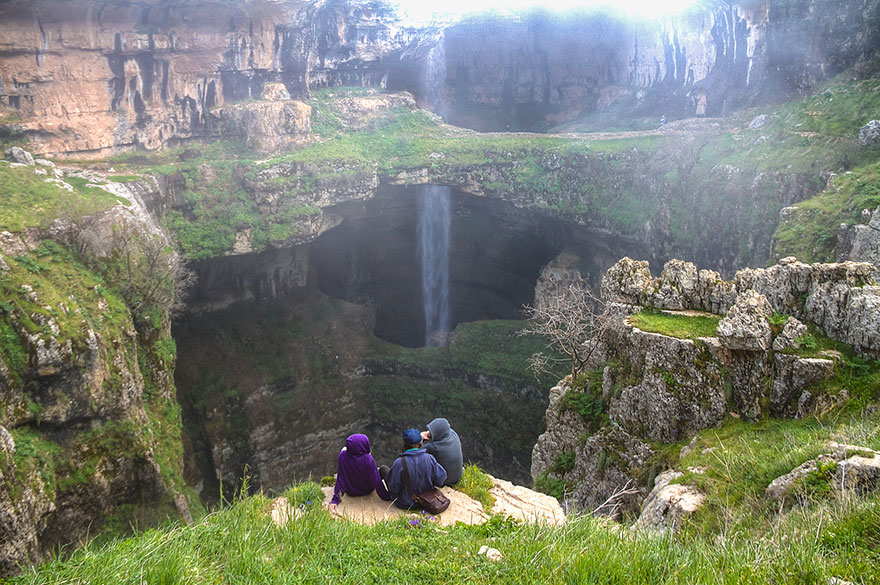 From this year, there have been a number of experiments to learn more about the Gorge. In 1988, these experiments revealed that the water is connected to an underground spring near a town nearby called Mgharet Al-Ghaouaghir. Other experiments have also shown that the limestone dates back to the Jurassic period.

Sounds like fun to walk along these natural bridges, maybe taking some pictures with the family or just by putting them on Instagram, but an eye to the danger! There are signs that warn tourists not to walk on the decks. In the case where many people should get over it, will collapse due to the weight, not counting the fact that these bridges are wet and can easily slip. One false move and you’ll be precipitated along with the waterfall! 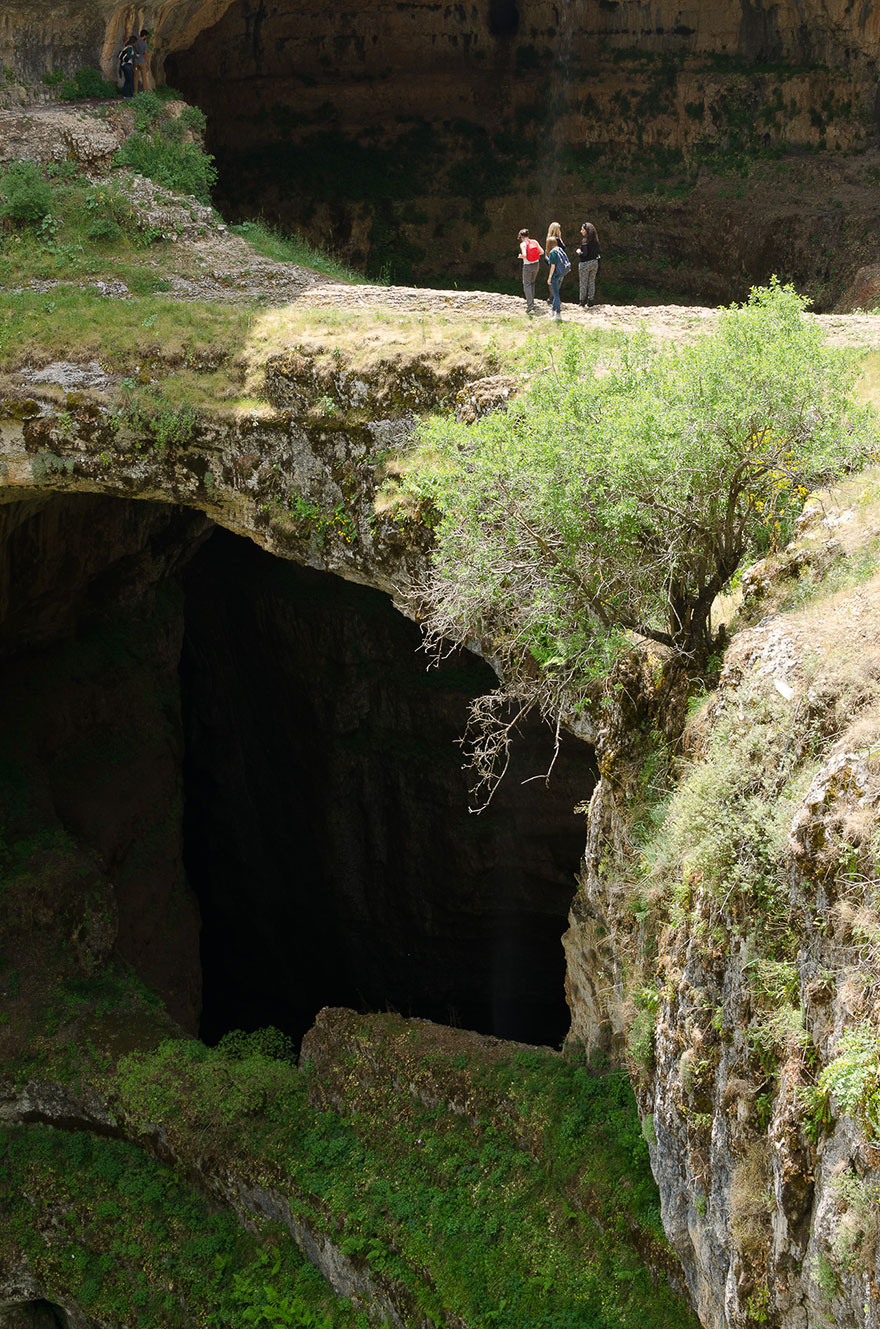 Even today, the rock formation tends to be subject to change, sometimes large chunks of ice fall down ruining the limestone walls; here’s another reason why it is not recommended to stand too close to the edges.

If you have never been to this area, you may also enjoy the beautiful views of Mount Lebanon, a huge mountain range that touches in some places 3,000 meters above sea level and extends to the whole of Lebanon. of these
mountains snow can reach 2 meters in height every year, and it is thanks to the snow that generates the waterfall. 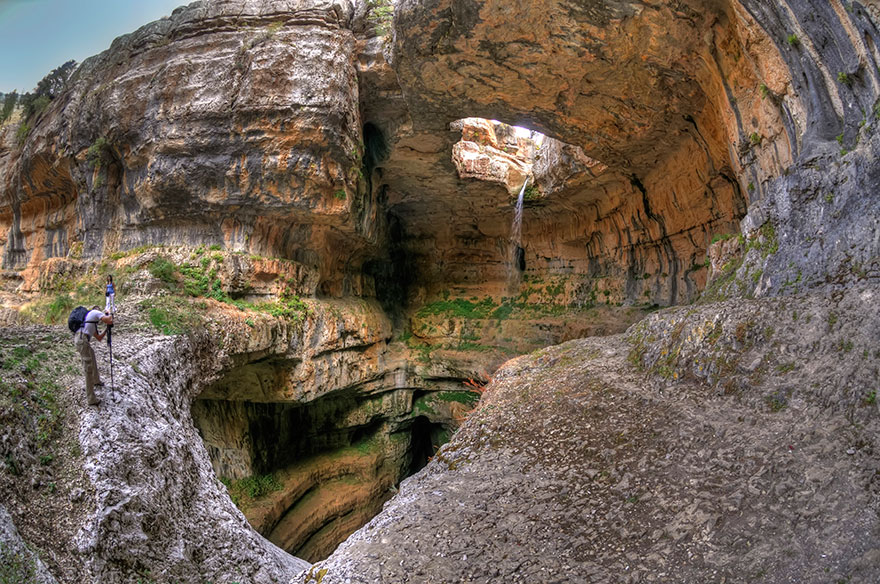 Each point of this gorge looks even more enchanting. The three bridges naturally tend to come between them (starting one right up to the top of the other). Then there is the waterfall that comes out from the inside. And do not forget the Jurassic-era limestone, full of stories that we can barely imagine. 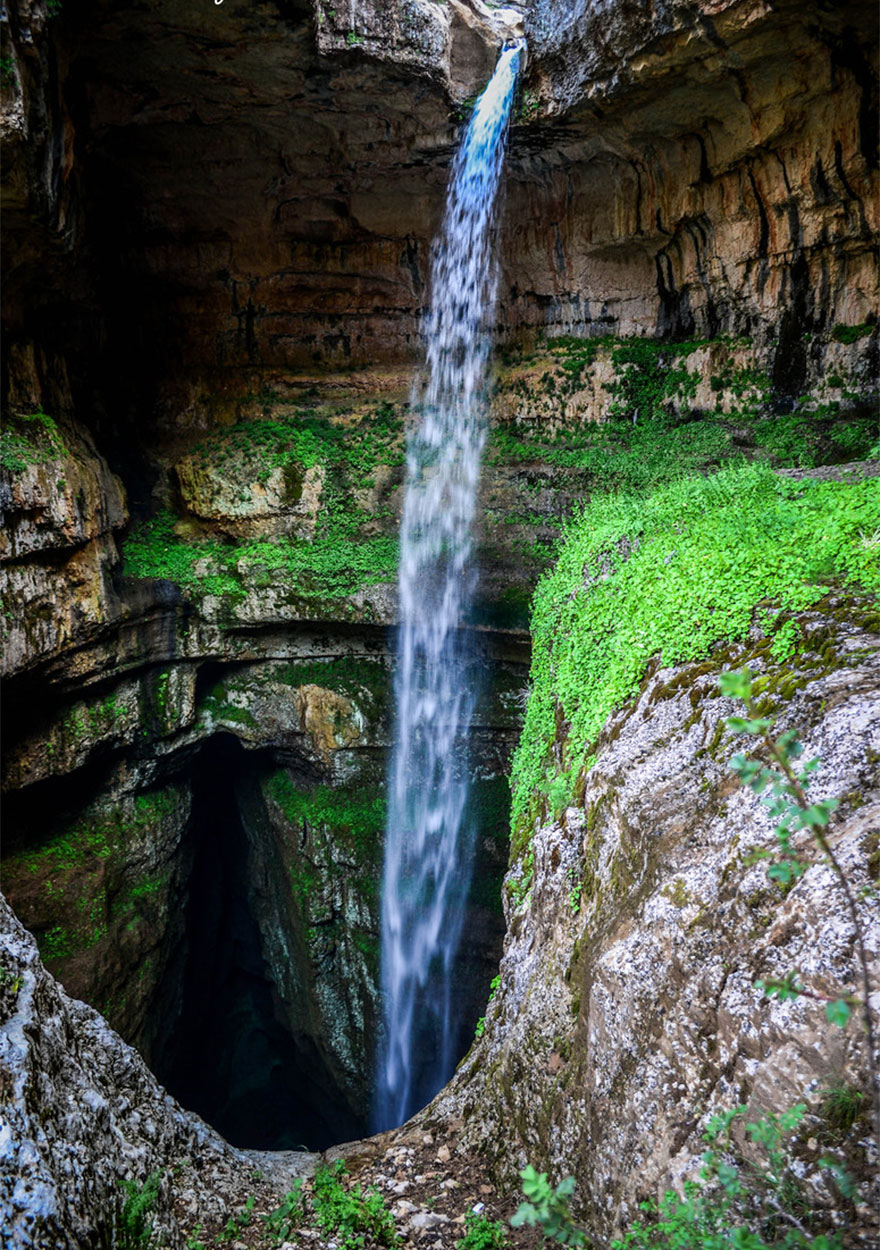